And explaining doesn't seem to help...


Half of American whites see no racism around them


Sexism is over, according to most men

Let's look at the 114th Congress, shall we? (Wonks: you can check out the stats here.)

Where industrious ants get dinner

You know Aesop's fable about the ants and the grasshopper. Conservative libertarians think it's scripture.


One bright day in late autumn a family of Ants were bustling about in the warm sunshine, drying out the grain they had stored up during the summer, when a starving Grasshopper, his fiddle under his arm, came up and humbly begged for a bite to eat.

"What!" cried the Ants in surprise, "haven't you stored anything away for the winter? What in the world were you doing all last summer?"

"I didn't have time to store up any food," whined the Grasshopper; "I was so busy making music that before I knew it the summer was gone."

The Ants shrugged their shoulders in disgust.

"Making music, were you?" they cried. "Very well; now dance!" And they turned their backs on the Grasshopper and went on with their work.


But this morning I saw something far more sinister than heartless ants. A grasshopper was caught in a spider's web, and the ants were eating him. 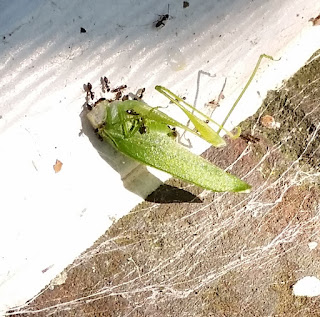 They're going to miss the concerts, though. And when the spider is done with the grasshopper, they'd better watch out.
Posted by LaVonne Neff at 10:42 AM 1 comment:

FINDING MYSELF IN BRITAIN by Amy Boucher Pye

If you're an American and spend much time in the U.K., somebody will undoubtedly quote you something that apparently George Bernard Shaw never actually said:


"England and America are two countries
divided by a common language."

Once upon a time I was the American editor for a British publisher, and I heard that aphorism frequently--probably because part of my job involved translating children's books from British to American English (please don't mention schoolchildren taking their rubbers to school!), or explaining to my British employers, for example, that the American author who referred to patting someone on her fanny was not being impossibly vulgar.

Altogether, my children, grandchildren, and I have studied or lived in Britain, France, Austria, Germany, Colombia, Taiwan, and China--so books about cultural differences interest me greatly. I was delighted to learn that my friend Amy Boucher Pye was writing such a book, and thrilled when she sent me a copy of Finding Myself in Britain: Our Search for Faith, Home & True Identity.

Amy is a Minnesota-born writer, editor, and vicar's wife (translation: her husband is a pastor in the Church of England) who has lived in Britain for nearly two decades with her U.K.-born husband and two children. When she moved to Cambridge (U.K.) as a new bride, she had no idea how isolated she would feel with an ocean between herself and her family and friends. Frequent moves as her husband finished theological college (seminary) and then took on several short-term appointments made it hard to feel at home anywhere. As a vicar, he was always busy on Christmas and Easter, so no trips to Minnesota for those holidays.

And then there was the plumbing: showers that barely trickled, separate hot and cold taps (faucets) so that warm running water was impossible. And the perpetual cold: drafts blowing the curtains out from the leaky windows, the radiators that came on only twice a day. All exacerbated by the legendary British stiff upper lip that would rather cope with discomfort than try to eliminate it.

As you can tell from the title, however, Amy grew to love her life in Britain, which has become her home if not her native land. What's not to like about free medical care? Twenty days a year of paid vacation plus bank holidays? Frequent breaks for tea (which is properly made in the U.K.)? Deep friendships that transcend cultural differences?

God, prayer, scripture, and evangelical writers and speakers show up frequently in Amy's story of her transformation from lonely foreigner to contented dual citizen. Herself a writer of devotionals, she encourages her readers to foster spiritual growth by keeping journals and rereading them at the end of each year--perhaps an intense evangelical form of the Ignatian daily examen.

If her approach to spirituality feels a bit over the top to people who do not share it, there is still plenty to enjoy for Anglophiles, expats, and Brits who spend time with Americans. Amy has a great sense of self-deprecating humor (how British!). Her Minnesota recipes may intrigue Brits unused to chewy cookies and pumpkin pie. And her abundant observations about British/American differences could spare eager Americans from self-inflicted indignities (the wrinkled nose, the tight smile) such as may occur, for example, if they prematurely introduce themselves (as one of her English friends explained, "Higher up the social scale it is still considered terribly forward to volunteer your name before having been formally introduced").

Be that as it may, if you happen to run into Amy, never fear. Though she now carries a British passport, she will be happy to learn your name!
Posted by LaVonne Neff at 9:27 AM No comments: