What James Comey got wrong 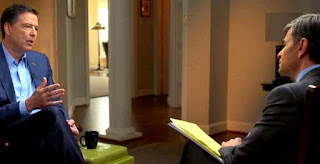 During the interview by George Stephanopoulos broadcast by ABC last night, James Comey spoke with calm dignity about the man who fired him last year. Comey did not call him names. He didn't even call him a liar, though he mentioned numerous occasions when the president told demonstrable lies. That the president lies, of course, is neither news nor opinion: it's verifiable fact. And Comey did express an opinion about that:


A person who sees moral equivalence in Charlottesville, who talks about and treats women like they're pieces of meat, who lies constantly about matters big and small and insists the American people believe it, that person's not fit to be president of the United States, on moral grounds.

Well then, wondered Stephanopoulos, "If you are right, what is the remedy? Should Donald Trump be impeached?"


Impeaching and removing Donald Trump from office would let the American people off the hook and have something happen indirectly that I believe they're duty bound to do directly. People in this country need to stand up and go to the voting booth and vote their values.

Perhaps the president should be impeached and removed; perhaps not. There are some problems, however, with Comey's answer.

Second, the people in this country did stand up and go to the voting booth and vote their values in 2016, and the largest number of votes—by a margin of nearly 3 million—were for Hillary Clinton. But our representatives in the electoral college nevertheless gave the election to Donald Trump.

Of course they should. The catch is that the people's representatives have been cowed by the playground bully in the White House. James Comey on several occasions should have told the president that his behavior and requests were out of line. He did not. Republican members of Congress on many occasions should have censured or stopped the president rather than attempting to put a good face on his behavior. They did not. And now some Republicans are hoping to energize Republican voters by warning them that, if Democrats take Congress later this year, Trump will be impeached.

I can think of no better reason to vote Democratic in November.

But then, I'm not a conservative. Still, I feel bad for my good, decent, kind, intelligent conservative friends (and they really do exist—probably in much greater numbers than many of us progressives want to admit). Progressives and conservatives need each other. Our country is strengthened when principled legislators with differing perspectives sit down together to craft policy. Conservatives should not be asked to shelve their deepest convictions in order to remove from office someone who violates them.


We owe it to each other to get off the couch and think about what unites us. I think about the people who supported Trump, and continue to support Trump. A lotta them come from families with a proud history of military service. And that's a wonderful thing. What did their fathers and grandfathers fight and die for? Not for immigration policy. Not for a tax policy. Not for Supreme Court justice. They fought and died for a set of ideas. The rule of law. Freedom of speech. Freedom of religion. The truth.

We know our president is not personally interested in military service, the rule of law, freedom of speech, freedom of religion, or the truth. We may soon learn to what extent his business affairs and other foreign entanglements cross the line from fraudulent to criminal.

Is it really a good idea to wait another two-and-a-half years for the people in this country to vote their values? Didn't we already do that in 2016? In a representative democracy, why shouldn't our elected representatives—of both parties—act on the values that unite us and put an end to our national nightmare?
----------------------------------------------
(The portion of the interview aired Sunday night was edited down to fit in a one-hour time slot with lots of commercials. You can read a transcript of the complete interview here.)
Posted by LaVonne Neff at 12:27 PM 8 comments:

THE DISCOVERY OF CHOCOLATE by James Runcie, with 2 ways to make chocolate cake as God intended

Five years ago I learned about Cook the Books, an online book club featuring not only books about food, but people who read those books and invent recipes inspired by them. One of those people even wins a prize. What could be more fun?

Back then they asked David and me to judge contributions based on Andrea Camilleri's The Shape of Water (the book, not the current movie by the same name, which bears no relation to it). Here's what we decided, and wrote.

Ever since, I've been reading their bimonthly emails announcing more books and more recipes. In February I noticed that they were featuring The Discovery of Chocolate by James Runcie (author of the books that inspired Grantchester, for you James Norton and Masterpiece fans), so I immediately ordered it. If, in the intervening weeks, I hadn't also acquired a new puppy, had a family reunion, celebrated 50 years of marriage, and survived Easter while being married to a church music director, I might have blogged about The Discovery of Chocolate in time to join their contest.  I liked the book more than any of their contestants did (and I'll tell you why), and I have a couple of killer chocolate recipes.

About the book:
I've read a lot of comments from people who hated it, or were mystified by it, or were bored by it, or thought it should have been written differently. As a former editor who helped authors develop their books in hopes of getting people to buy them, I respect those comments. Runcie's book fits no categories - not even magical realism, which many commenters think it is. It could be a hard sell.

But as a big fan of Voltaire's Candide, I chuckled all the way through Runcie's mash-up of impossible stories.* Candide is a classic and The Discovery of Chocolate is a bit of fluff, but both books are wickedly funny, both authors wink as they toss out allusions for readers to recognize, and both sweetly expose cruelty, pomposity, and hypocrisy through the naïve observations of their credulous protagonists.

Like Candide, Diego voyages throughout the world, having one bizarre adventure after another. Both characters are inspired by love, and both witness actual historical events. Unlike Candide, however, Diego also voyages through time. He's a gourmand, not a philosopher. He ends up at a Día de los Muertos festival, not in a garden. And he has a dog.

Also, the book is about chocolate.

About chocolate:
There's something called red velvet cake that I didn't discover until I moved to Maryland. Apparently it's a Southern thing. They think it's chocolatey. It is not.

There's something called a Texas sheet cake that is slightly more chocolatey, but it's still pretty wimpy.

Chocolate, my friends, can be assertive and even rough. It can be deep and rich and smooth. But it should never be bashful. It should never be milky, for heaven's sake. And it's not about the sugar. Cocoa content of 72% is good, but 85% is better, and 100% is just fine with a bit of coarse salt. That's my story, and I'm sticking to it.


Back in 2009, I posted a recipe for a seriously fortified Texas sheet cake. The previous year I posted a recipe for flourless chocolate cakelets, whose chocolate content is even more intense. Both recipes still work. Try them. I can't promise that they'll make you immune to death, like Diego's elixir in The Discovery of Chocolate, but who knows?
______________
*Clarification: I have degrees in French; Runcie earned a first in English from Cambridge University. I'll bet he was thinking, not of Candide (1759), but of Gulliver's Travels (1726). It's possible that Voltaire was thinking of Gulliver's Travels too--he was living in England when it was published. Take your pick. The point is, The Discovery of Chocolate is an 18th-century novel with sly 21st-century allusions. And it's about chocolate.
Posted by LaVonne Neff at 9:36 AM 3 comments: