Can you tell an -est from an -eth? A thee from a thou? And what's ye* all about, anyway?

If you want to make fun of turn-of-the-seventeenth-century English, or if you have the nobler aim of understanding Shakespeare or the King James Version, this short lesson may help.

Contrary to popular opinion, writing like a Jacobean is not quite as easy as adding eth to every verb. But it's not all that difficult, either. Here's the one clue that makes it all fall into place:

Jacobeans made a distinction between you (singular) and you (plural).

Since Texas hadn't been invented in 1611, they didn't have the you-all option at their disposal. So they used a different set of words to distinguish you, my friend, from you guys. Look at the charts below to see how it works.

So, what about those verbs?
Actually, they’re mostly like ours. As you’d expect by now, the verb that goes with the 2nd person singular is different. If your subject is thou, your verb is likely going to end in the letter t. You know about thou shalt [not]. Other common (and irregular) verbs are thou art, thou wilt, thou hast, thou dost, thou canst, thou wouldst, thou shouldst, thou couldst … they all end in t, and most of them end in st. Less common (but more regular) verbs tend to end in est, especially if it’s easier to pronounce that way: thou eatest, thou drinkest, thou sleepest, etc.

If your subject is he, she, or it, your verb is likely going to end in the letters th: he hath, he doth, he saith [not sayeth], or the ever-popular eth: almost everything else. He prayeth, he loveth, he eateth, he drinketh. Think of it as a lisp. If the modern English verb ends in s, substitute th or eth and you’re talking like a Jacobean.

But if the modern English verb doesn’t end in s, then don’t mess with it! A Jacobean can, would, should, and could.  And the verb to be breaks every rule. A Jacobean, like a 21st-century person, is what he is.
_____

Ye Olde Curiosity Shoppe is something else altogether. Here the Y is a now-defunct letter that is pronounced th.

Why Brits wish they could buy gas in Chicago 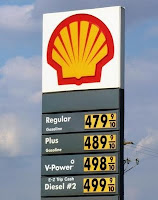 Let us briefly interrupt our hyperventilating to consider how our gas prices compare with, say, petrol prices in the UK.

UK prices aren't exceptionally high, by the way: all over Europe, prices are similar.

How do Europeans cope? They drive smaller, more fuel-efficient cars. They invest in excellent public transit. They live closer to work. Many of them ride bikes or walk. (The extra exercise not only saves gas; it may also be one reason why Europeans tend to be healthier than Americans.) And, of course, they tighten their belts - their gas prices have been soaring too.
Posted by LaVonne Neff at 10:27 AM No comments:

CNN reports that Claude Choules, 110, has died in Perth, Australia. Mr Choules was "the last known survivor of the 70 million combatants from World War I, a British sailor who witnessed the surrender of the German fleet in 1918."

That was the war known at the time as "the war to end all wars. As we know all too well, it didn't. Approximately 16 million people died in that war, and then 21 years later war broke out again. Estimates of World War II deaths range from 50 to 78 million.

his father refused to glorify war.... In later life Choules refused to be interviewed about the wars in which he served. "He always said that the old men make the decisions that send the young men into war," Adrian said. "He used to say, if it was the other way around, and the old pollies were off fighting, then there would never be any wars."

I read about Choules's death right after watching Stanley Kubrick's 1957 film, Paths of Glory, about French officers, troops, and an impossible assignment in 1916. If ever a film illustrated Claude Choules's words, this is it. Self-deception, pride, cynicism, arrogance, injustice, hypocrisy, mendacity - Kubrick explores all these themes in a mere 88 minutes in a film that will incite you to shake your fist and roar at your TV screen.

There are plenty of decent human beings in the film, and some of them are officers. Colonel Dax (Kirk Douglas), for example, who defends the three hapless scapegoats, is appealingly earnest. The villains range from the oily Général  Broulard (Adolphe Menjou) to the miserable Lieutenant Roget (Wayne Morris), all managing to be despicable without turning into caricatures. Best performance in my book was Ralph Meeker's portrayal of Corporal Philippe Paris, a dutiful soldier who suffers for other men's sins. Nobody won any Academy Awards, however, and the film was so controversial that it was banned in France and Switzerland for nearly 20 years.

OK, it's probably not a date night film, but it's gripping, provocative, and brilliant - will that do? Preview it here, or read this excellent review and summary, or read the book it was based on ("a chilling portrait of injustice, this novel offers insight into the tragedies of war in any age"), or ask Netflix to send you the DVD.

In case you're wondering about the title: It comes from Thomas Gray's poem "Elegy Written in a Country Churchyard," line 36:

The paths of glory lead but to the grave.
Posted by LaVonne Neff at 12:38 PM 1 comment:

VIRTUALLY YOU by Elias Aboujaoude

A virulent danger lurks in our homes, in our offices and—very likely—in our pockets. It may rewire our brains and erect a barrier between us and our cultural heritage (says Nicholas Carr in The Shallows). It may play havoc with our personal relationships and our sense of identity (cautions Sherry Turkle in Alone Together).

It may even nudge us into full-fledged pathological behavior, either creating new disorders or bringing out abnormalities that already lie deep within us. So warns Elias Aboujaoude—a psychiatrist and the director of Stanford University's Obsessive-Compulsive Disorder Clinic located in Silicon Valley, the world's technological heart—author of Virtually You, one of this year's most thought-provoking jeremiads.

The danger, according to a swelling chorus of authors, is the Inter­net, or the way we use the Internet, or the way we have stopped doing a lot of things we used to do before the Internet took over our lives. "While the Internet is a force for good in many arenas," writes Aboujaoude, "it also has the power to interfere with our home lives, our romantic relationships, our careers, our parenting abilities—and our very concept of who we are."

From the opening paragraphs of my review, newly published in "Christian Century" magazine and on its website. Read the rest of the review by clicking here.

THE FIFTH WITNESS by Michael Connelly

Six years have passed since attorney Mickey Haller, aka The Lincoln Lawyer, defended rich young Louis Roulet against murder charges. Haller has recovered from physical injuries sustained during that case and spent time in rehab shaking a painkiller addiction. Working with half-brother Detective Harry Bosch, he has defended a Hollywood producer (The Brass Verdict) and threatened to quit law altogether. Then, switching sides, he has prosecuted an accused child molester (The Reversal). He is brilliant at whatever he tries.

But Haller has hit hard times. The economic downturn has left criminal defense lawyers without clients: though crime still flourishes, criminals are short on cash. To survive, Haller is now fighting foreclosures. Individual payments are low, but an ad campaign has brought him lots of customers. The downside? The work isn't very challenging—until one of his clients, Lisa Trammel, is accused of murdering the banker who foreclosed on her house.

That's the beginning of my review of "The Fifth Witness," which is now online at Books & Culture: Web Exclusives. Click this link to read the whole review (it's not all that long). Click it quickly, before Connelly's next book comes out this fall!
--------------------------
Related posts on this blog:
The Lincoln Lawyer
The Reversal
Posted by LaVonne Neff at 9:23 AM No comments: