Countless eons ago when Mr Neff turned 35, I posted an announcement on his office bulletin board: “If, as Psalm 90:10 attests, ‘The days of our years are threescore and ten,’ congratulations to David for having reached middle age!’” Last October when our younger daughter turned 35, I tried congratulating her on the same achievement. “Mother,” she protested, “35 is not middle-aged.”

So I decided I needed an objective definition of middle age. I went to the Web, of course, and found that the Collins French Dictionary and Grammar is right in saying that midlife boundaries are indistinct (one online English-French dictionary defines middle-aged as "of a certain age;" another defines it as "fiftyish").

Though medical researchers often refer to people aged 35 to 55 as middle-aged, most English-speaking Web sites define middle age as the years from 40 to 60: Check out Answer.com, Encarta, Collins, American Heritage, and thefreedictionary, for example.

As lifespans increase and Boomers refuse to grow up, however, many sources are now extending middle-age upward. Wikipedia notes that for the OED, middle age begins at age 45, whereas for Erik Erikson, it ends at age 65. Merriam-Webster suggests ages 45 to 64; WebDictionary, 45 to 65, and Your Dictionary, 40 to 65.

Even the 40-to-60 span reflects changing attitudes: the 1913 edition of Webster defined middle age as "being about the middle of the ordinary age of man; between 30 and 50 years old."

Depending on which definition you choose, my daughters may possibly be middle-aged, or they may hang on to young adulthood for up to ten more years. By the same definitions, I may be middle-aged, or I may have left that category as long as ten years ago. Most likely, though, I'm going to change categories six weeks from tomorrow, when I turn 60. (My kids and grandkids began the celebration early by performing a wicked parody of "I Will Survive"--for the original, click here--and by giving me DVDs of my favorite British comedy, As Time Goes By

. I'm guessing this means they think I am leaving middle age behind.)

For the sake of discussion, let's say middle age does end at 60. That makes sense in France, for example, where people retire at 60 and thereafter belong to le troisième âge (le quatrième âge begins in the mid-70s). But just what is a post-middle-aged pre-retired American?

Are we middle-aged longer than the French because we don't know when to quit working?

Or have we become prefixes (post-middle-aged, pre-senior, semi-retired) or present participles (aging, graying, or, in French, les croulants--the crumbling ones)?

What is this space between midlife and old age?

Followers of the Benedictine tradition learn to pause at the threshold when passing between rooms, when entering buildings, and, by extension, when changing activities, experiences, and ways of life. Maybe these are the threshold years--a time to stop, take stock, give thanks, breathe deeply, get ready for the next step.

So it's back to middle-aged. "Neither old nor young," says Wiktionary. That's fine. Whatever the term and whatever the age, Epicurus offers this good advice:

Let no one be slow to seek wisdom when he is young nor weary in the search of it when he has grown old. For no age is too early or too late for the health of the soul. And to say that the season for studying philosophy has not yet come, or that it is past and gone, is like saying that the season for happiness is not yet or that it is now no more. Therefore, both old and young alike ought to seek wisdom, the former in order that, as age comes over him, he may be young in good things because of the grace of what has been, and the latter in order that, while he is young, he may at the same time be old, because he has no fear of the things which are to come. So we must exercise ourselves in the things which bring happiness, since, if that be present, we have everything, and, if that be absent, all our actions are directed towards attaining it.

Posted by LaVonne Neff at 4:58 PM No comments:

Of making many books there may be an end 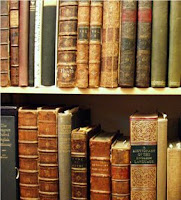 Fifteen years ago or so, when AOL had made e-mail easy and everyone was getting into it, the frugal Mr Neff suggested that we use e-mail instead of the telephone to stay in touch when he traveled. I objected. "E-mail is so Protestant," I said--"all word, and no real presence."

From body to word
Back in the late fifteenth century, when Mr Gutenberg's invention had made books easy and everyone was getting into them, the printed word became cool. Newly discovered ancient sources were now available to everyone who could read, and their authority seemed to trump that of the local bishop. As Martin Luther sang, "That word, above all earthly powers, no thanks to them, abideth."

Church services began morphing from sacral rites and mysteries into classroom lectures. Eventually, in many circles, salvation would hinge on saying the right words rather than on receiving the church's sacraments, and devotion would mean regularly reading from a book rather than kneeling before the Eucharist.

An embodied church--one with jewel-toned windows, a rumbling organ, mold and incense, bread and wine, cold holy water and trickling oil--became a tourist attraction, an exercise in nostalgia. Modern spirituality could be bought at Borders, and the coffee was good too.

The word falters
Borders, it turns out, was so twentieth century. The giant bookseller is in financial trouble: in March, it admitted it was looking at a number of options including putting itself up for sale, and Tuesday it announced it would lay off 274 corporate employees, a twenty percent reduction.

Publishers are in trouble too, or at least trying to keep trouble at bay. In April, Thomas Nelson said it would cut its number of new titles in half and reduce its workforce by ten percent. In May, Zondervan laid off five executives including the publisher; while Random House, the world's largest publisher of consumer books, replaced CEO Peter Olson, 58, with Markus Dohle, 39.

Yesterday HarperCollins replaced CEO Jane Friedman, 62, with Brian Murray, 41. Publishers Weekly, the trade magazine for bookstores, libraries, and publishers, recently cut their reviewers' pay in half; Tuesday they laid off their religion editor (never mind that religion books consistently outsell books in all other categories).

What's next?
Is this just the normal shuffling of personnel, unusual only in that so much is happening at once? Is it merely a cyclical changing of the guard as Boomers age and a younger generation matures? Is it nothing more than one industry's response to recession? (The airlines have been having a rotten spring too.)

Or is something more paradigmatic happening here? Will future historians say the Age of the Book lasted from about 1500 to about 2000? Will the Digital Age eventually turn books into curious antiques? (If you haven't already seen the YouTube video "Introducing the Book," click here now.)

New CEO Murray says that this is "a time when digital technologies are creating new opportunities to bring authors and readers together." If the book, the technological wonder of 1500, inexorably moved people away from real, embodied presence, where will digital technologies take us?
Posted by LaVonne Neff at 3:28 PM No comments: 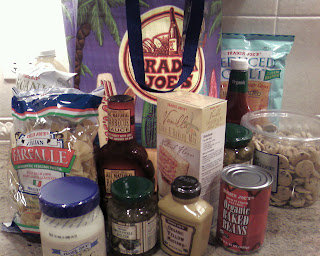 During Lent I posted two articles about giving up plastic bags; see "Plastic bags" or "Give up carbon for Lent" if you're still in a self-flagellating mood.

Or, now that endless Ordinary Time (the green season!) has returned, rejoice with me--my tiny good deeds have been rewarded.

Last week, as usual, I parked the car in Trader Joe's parking lot, hurried to the entrance, read the sign that asks, "Did you leave your reusable bag in the car?", sighed heavily, and allowed my good and evil angels a moment to duke it out.

The weather was perfect. My car was in a nearby space. I was not in an extreme hurry. Not to return to the car would have been lazy indeed, and probably one of the seven deadly sins.

I went back and got my bag. And when I checked out, I filled out one of those little tickets that enters virtuous bag ladies in a raffle for a bag of groceries.

They phoned Sunday, while I was at church, to tell me I'd won. Here's a picture of the booty--just what we need for our forthcoming family vacation, and a new Trader Joe's bag as well.

I'm delighted, and I love Trader Joe's, but I do have a question for them: What's the point of bringing my own bag when nearly everything you sell is swathed in plastic?
Posted by LaVonne Neff at 10:51 AM No comments: