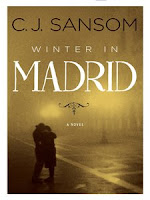 Fans of C.J. Sansom's Tudor-era detective Matthew Shardlake may appreciate this 20th-century Spanish interlude, written between Sovereign and Revelation but set some 400 years and 800 miles distant from Henry VIII's London. Or they may wish he'd stuck with the Renaissance series instead of switching to a nearly contemporary thriller about the intersecting lives of three British public school classmates who, improbably, meet again in Franco's Spain--one of them a Communist p.o.w., one an amoral profiteer, and one an increasingly disillusioned traditionalist who only wants to do the right thing.
I liked the book right up to the thrilling denouement, and then I wasn't so sure. Like Shardlake, Harry Brett is an observer in a world gone mad. The principal action takes place in 1940, after Franco's coalition has won the civil war and is attempting to rebuild a flattened country. Ideologues have turned murderous. Factions have split into warring sub-factions. The established church is collaborating with evil. Honesty is not necessarily the best policy, for nothing is as it seems.

Somewhat too-frequent flashbacks give the backstory: class resentments, romance, a war injury. English characters--the three men, a female nurse, various embassy employees--are well developed; Spanish characters less so. Knowing next to nothing about the Spanish Civil War, I found myself consulting old history textbooks and Wikipedia to try to understand the references (this slowed down my reading, but I learned a lot). And once I was up to speed, I was drawn into the story's romance, intrigue, and terror.
Sansom, a professional historian, knows how to bring other times, other places alive. Historical and geographical detail illuminates but does not blind. As I read, I found the same thought going through my mind that haunted me as I read the Tudor books: Something like this could happen here. Bitter antagonism between ideological enemies; willingness to harm others for the sake of political beliefs; powerful deal-makers enriching themselves at the expense of the people they govern--is our fractious society preparing once again for similar horrors?
Near the end of the book, one of the main characters says something striking:

"The people, the ordinary people, it looks like they've lost but one day, one day people won't be manipulated and hounded by bosses and priests and soldiers any more; one day they will free themselves, live with freedom and dignity as people were meant to."

This affirmation of hope jumped off the page, probably because I've just read a forthcoming book by Desmond and Mpho Tutu called Made for Goodness. Confidence like this--in the Tutus' case, bolstered by faith in God--kept Archbishop Tutu going during apartheid. But by book's end, Madrid's confidence seems to run out, replaced by cynicism. That is no reason to avoid the book, however. It's a good read, and very thought provoking. I'd like to know what thoughts it provokes in you.
Posted by LaVonne Neff at 7:32 PM No comments: 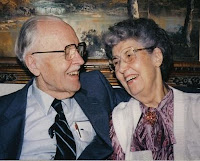 Fifteen years ago next week, on my mother's 85th birthday and exactly one week before Ash Wednesday, my father died.

Some months later I wrote a short memoir about my parents, death, dying, and faith. I say I wrote it, but at the time it felt like I tore it out of my chest. It is the most real thing I have ever written. U.S. Catholic magazine published it for Ash Wednesday 1996. Today, the day before Ash Wednesday 2010, I share it with you.

To dust you will return
From U.S. Catholic (March 1996), pp. 34-36, © 1996 LaVonne Neff
The deacon dipped his thumb in the ashes and marked my forehead with a cross. It was Ash Wednesday 1995, and I was having no trouble remembering my mortality. Less than 24 hours earlier, I had buried my father.
Nine or ten years ago, my father began showing signs of forgetfulness. Nothing serious, I thought. I have trouble remembering things myself.
A year or two passed, and his memory lapses became more noticeable. “I may have already mentioned this,” he would say, and I would cringe, knowing he was about to embark on a story he had just finished telling five minutes ago. Maybe he needs his thyroid checked, I said to myself.
In 1989, when my parents were 79, my husband and I flew 2,000 miles to help them close up their condominium and move into a retirement apartment. My father met us at the airport. He could not remember where he had left the car, and on the way home he got lost three times. As we packed and moved their things, we continually ran across small portents: a comb neatly tucked in a shoe, a pan lid on the bookshelf. In the pantry, next to 17 jars of Metamucil, were 37 bottles of hand lotion. And everywhere were reminder notes scrawled in my father’s hand: “Harold phoned.” “Go shopping.” “The bread is in the refrigerator.”

Here’s an idea for Lent that will do more good than giving up desserts: Read a book about contemporary sub-Saharan Africa. It's not a penance, though it can hurt. And seeing how much of the rest of the world lives sure does put a lot of my minor irritations and even major problems in perspective. 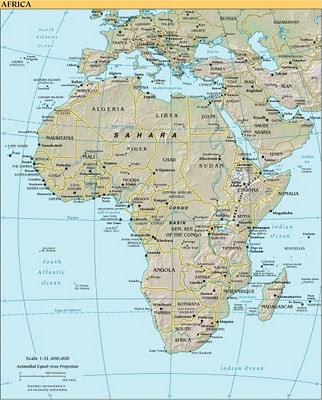 Consider a novel or memoir by an African, such as
Chimamanda Ngozi Adichie, Half of a Yellow Sun (Nigeria)
Athol Fugard, Tsotsi (South Africa)
Ishmael Beah, A Long Way Gone (Sierra Leone)
Peter Godwin, When a Crocodile Eats the Sun (Zimbabwe)


Or read a journalist's first-person account, like
Dave Eggers, What Is the What (Sudan)
Tracy Kidder, Strength in What Remains (Burundi)
Ryszard Kapuściński, The Shadow of the Sun (post-colonial Africa)
Philip Gourevitch, We Wish to Inform You That Tomorrow We Will be Killed With Our Families (Rwanda)

If you'd rather watch a movie, try one of these:
The Devil Came On Horseback (Sudan)
Tsotsi (South Africa)
War Dance (Uganda)
Hotel Rwanda (Rwanda)


+  +  +
Folks who live near Wheaton, IL, can kick off their African Lent next Saturday, February 20, 2010, by coming to A Night of Hope and Music, the fifth annual benefit concert by Chicago-area professional musicians in support of a medical clinic in Renk, Sudan. Previous concerts have provided the clinic with lab equipment, medicines, and a midwife's salary.

Posted by LaVonne Neff at 11:36 PM No comments: 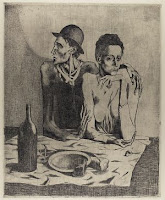 In January of 2009 Mr Neff and I began a Lenten experiment. We wanted to see if we could eat adequate amounts of tasty and nutritious food on a food-stamp budget. We also wanted to see what we might learn from the attempt. I recorded the experiment in fifty almost-daily posts here on Lively Dust. Trouble is, it's awkward for anyone to go back and read them, because blogs always put newest posts first.

To make them available to Lively Dust readers in a more accessible format, I set up a new blog, The Lenten Experiment, and arranged the posts in chronological order from "1. Please advise us on our Lenten plans," written several weeks before Ash Wednesday, to "50. The Lenten Experiment: Analysis," written the week after Easter. In between are dozens of posts with recipes, menu plans, money-saving ideas, and cheap wine recommendations.

Ash Wednesday is less than a week away. Maybe after this year of continuing economic recession, Congressional stalemates, a monster earthquake, and paralyzing snowstorms, we don't need a spiritual discipline to remind us that we are dust and ashes. On the other hand, maybe the simple act of trimming our food expenses for 40 days would help those of us in affluent countries to be grateful for what we still have, and mindful of the needs of others.
Posted by LaVonne Neff at 1:09 AM No comments:

Mr Neff thinks he has read many books that he has actually never touched. This is because I have the annoying habit of reading their funny bits to him while he is trying to concentrate on some morally uplifting theological work (or to snooze with it sprawled across his chest). No doubt he thinks he has read Deaf Sentence.

Desmond Bates, a "tall, bespectacled, grey-haired man" in his mid sixties, has been hard of hearing for 20 years. Four years ago he took early retirement from the university--he was a professor of linguistics--because his deafness was interfering with his teaching, and now he feels vaguely useless. His 89-year-old father probably should not be living alone in London, half a day's journey from Desmond's house, but with his repetitive stories and unreliable bladder, he's no joy to have nearby either. Desmond himself is drinking far more than is good for him. Meanwhile, Desmond's wife, Fred, has opened a home decor shop, and business is thriving.

No, it really isn't that kind of book, though I cringed through quite a few pages before Desmond figured out he was being duped and developed some backbone. For the first 250 pages it's a comic novel about deafness and old age and drunkenness and dementia and suicide--and then, without warning, it turns serious.

I'd give examples of how David Lodge, who himself is hard of hearing, makes each of those topics hilarious, but he rarely throws off one-liners. I'd have to quote whole pages, as I did to the long-suffering Mr Neff; and he thinks you'd enjoy them more if you just read them yourself, in context. Don't miss chapter 16, "Deaf in the Afternoon," in which Desmond and Fred join friends at a resort called Gladeworld, Desmond is reminded of Dante's Inferno, and a bizarre accident in an outdoor shower renders Desmond profoundly deaf and panicked.

The tone changes, however, in the untitled chapter 18. There is little badinage in the rest of the 291-page book as Desmond, on a speaking tour in Poland, visits Auschwitz and comes home to find his father in hospital following an incapacitating stroke. "Deafness is comic," Lodge writes, but "death is tragic, because final, inevitable, and inscrutable.... You cannot experience it, you can only behold it happening to others, with various degrees of pity and fear, knowing that one day it will happen to you."

The shift in tone might well irritate readers who had hoped to laugh all the way to the end of the book. Not that there aren't plenty of tonal shifts in the first part. Lodge merrily stirs up a brew of third-person fiction, journal entries, linguistic analysis, philosophy, slapstick, erotica, and literary allusion (he is, after all, the author of The British Museum Is Falling Down, a 1965 novel in which he intentionally mimics the styles of ten famous authors and alludes to a number of others). Still, chapter 18 comes as a shock. Lodge's trademark comedy vanishes, peaking out again only briefly before the loose ends are tied off and Desmond returns to his muted, vaguely useless, but perhaps now more interesting days. "You could say that birth itself is a sentence of death," Desmond observes. "Better to dwell on life, and try to value the passing time."

I read Deaf Sentence because I enjoy comic novels and David Lodge, and I was not disappointed. Given the book's subject matter, it could also be a good read for Lent.
Posted by LaVonne Neff at 9:37 PM 1 comment: