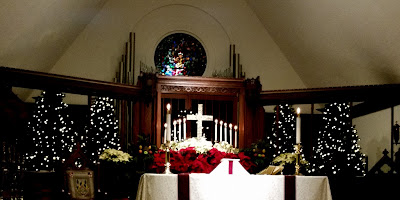 
Take those words literally, spiritually, metaphorically, mythically, mystically, poetically, or however you can. At the end of 2016, we all need reminders that the universe is ultimately good, creative, loving, alive; that though the arc of the moral universe is long, it bends toward justice. We need to hear that light overcomes darkness.

There is so much darkness.

For most of 2016 the world has felt like Narnia before Aslan showed up: always winter, never Christmas. Even Christmas alarms us as the world perches on the edge of chaos. We read W.B.Yeats's "The Second Coming" and wonder:

...[W]hat rough beast, its hour come round at last,
Slouches towards Bethlehem to be born?


And then an angel slashes through the darkness, shouting: "Don't be afraid!"

And the shepherds, who have been diving for cover, suddenly notice that the sheep are laughing at them, and so they sheepishly crawl out from behind the rocks and begin singing "Everything's gonna be all right."  And they all live happily ever after ...


... except for those Bethlehem babies that Herod murdered, of course; and Jesus's family, who were so afraid of the new king that they hid from him in Egypt; and Jesus himself, who was executed by a Roman puppet too timid to stand up to the mob; and most of Jesus's best friends, who within a few years were dead, and not of natural causes...

There has always been so much darkness.

In noontime darkness two thousand years ago, the dying Jesus cried out, "My God, my God, why have you forsaken me?" In this dark year, 2016, the dying Leonard Cohen cried out,

You want it darker
We kill the flame

And yet there has always been a glimmer of light in the darkness.

The world is all messed up. The nation is sick. Trouble is in the land; confusion all around....
But I know, somehow, that only when it is dark enough can you see the stars.

On the year's darkest days, we light candles for Christmas, Hanukkah, Winter Solstice, Kwanzaa. Their light is faint. It flickers. It is imperfect. But still, we light them.

As we head into a possibly calamitous new year, I think of Cohen's "Anthem":

Ring the bells that still can ring
Forget your perfect offering
There is a crack in everything
That's how the light gets in.

If 2017 turns out to be even darker than 2016, I hope I can hang onto the words of Gerard Manley Hopkins in "God's Grandeur":

And though the last lights off the black West went
Oh, morning, at the brown brink eastward, springs--
Because the Holy Ghost over the bent
World broods with warm breast and with ah! bright wings.

How does your net worth compare to Donald Trump's?

Here's a fascinating video using the Morgan State University football field to compare the age of the earth - approximately 4.5 billion years - to the length of time humans have been on the planet.

You could use the same visuals to compare Trump's net worth  - approximately $4.5 billion, according to some estimates (and much more according to Trump) - to other Americans' net worth.

Trump's net worth, using the $4.5 billion figure, is the entire football field.

Approximately 99% of individual Americans' net worth ($8 million or less) is within the last 7.5 inches of the football field.

Approximately 50% of individual Americans' net worth ($82 thousand or less) is within the last 1/12 of an inch of the football field--the width of a matchstick.

Approximately 20% of individual Americans' net worth ($4314 or less) is within the last 100 micrometers of the football field--the width of a human hair.

Check here for U.S. wealth amounts by percentile.
Posted by LaVonne Neff at 10:35 AM No comments: