Fact-Checking Only One of Trump's Lies This Week

From yesterday's interview on Fox News:


“I had one of the greatest election victories in history, wouldn’t you say that’s right?” [Trump] then asked host Maria Bartiromo, who nodded her head and responded “Yes, absolutely.”

I suppose that depends on how you define "great." Even Trump knows that he lost the popular vote. Let's compare his percentage of the Electoral College vote with those of all the other presidents in his lifetime, shall we? 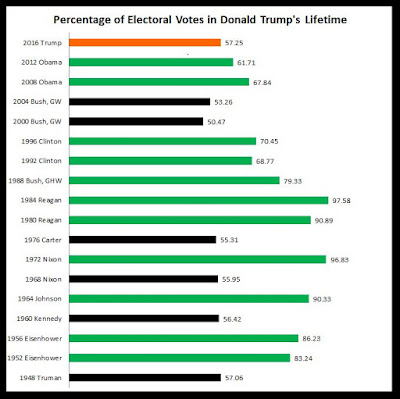 The average Electoral College percentage of all seventeen of those presidents - those with lower as well as those with higher percentages than Trump's - is 71.87%. Trump's percentage, an unimpressive 57.25%, lowers the average.

Apparently Trump has only one possible definition of "one of the greatest election victories in history": He thinks it was great because he won. And his Fox News interviewer "absolutely" agrees with him.

In related news this week, George Conway, referring to the diagnostic criteria for narcissistic personality disorder, nailed it. 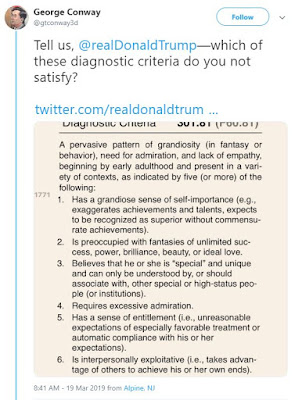