I freely admit what you already know: I am a wonk. So when the book I'm reading, The Moral Measure of the Economy, laid out a bunch of fearsome statistics going up to 2005, I was compelled to update them. I'm not going to bore you with all the stats. I'd just like you to notice one thing that seemed odd to me. Maybe you can tell me what's going on.

We all know that the gap between rich and poor is getting wider. What I didn't know was that, whatever the forces may be that are driving rich and poor apart, they don't seem to be related to one party or the other.

Here's what the book says:

So I looked up the Census Bureau table that gives this information (it's here; go to Table F-3 and click "All Races" for the Excel file), and I calculated the ratio for each year since 1966, and I made this chart. The short silver bars at the bottom represent the average income of the bottom 20%. The long green bars represent the average income of the top 5%. See the gap widen ... 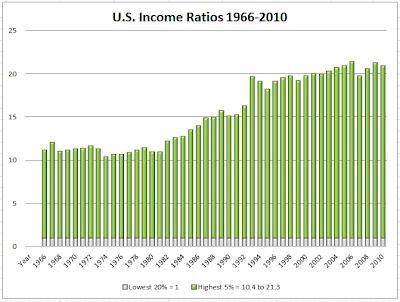 Here's what seems odd to me:

Something is causing our nation to become more and more unequal (in opportunity as well as in income, as Joseph Stiglitz points out in The Price of Inequality: you can read an excerpt here). Whatever it is, neither Democrats nor Republicans have effectively dealt with it.

Economics is a complicated science:
- is our rising inequality a failure of understanding?
Tax hikes, even for the rich, are hard to get through Congress:
- is it a failure of will?
The princes of Wall Street, Wal-Mart, and multinational corporations are doing just fine:
- is it a triumph for their lobbyists, who spend more and more every year?

And if we find it distressing, who are we supposed to vote for, anyway?
Posted by LaVonne Neff at 5:34 PM