Yesterday in U.S. health care policy - a step in the right direction 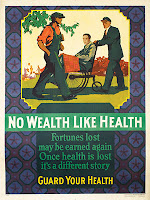 Yesterday a provision in the Affordable Care Act went into effect: health insurers' profits must now be limited.

In response, Rick Ungar, a journalist specializing in health-care policy, posted a feisty column on Forbes's Policy Page. Provocatively titled "The Bomb Buried in Obamacare Explodes Today - Hallelujah!," the article looks at "the provision of the law, called the medical loss ratio, that requires health insurance companies to spend 80% of the consumers’ premium dollars they collect—85% for large group insurers—on actual medical care rather than overhead, marketing expenses and profit."

Knowing how much Steve Forbes hates the Affordable Care Act (see, for example, my November 10 post), I started reading Ungar's post with trepidation. Was his "Hallelujah" sarcastic? Was he wincing when he wrote that the medical loss ratio provision would lead to "the death of large parts of the private, for-profit health insurance industry"?

Evidently not. Insurance companies can't possibly make a profit once this provision is enforced, Ungar writes, and their parent companies are "fleeing into other types of investments. They know what we should all know – we are now on an inescapable path to a single-payer system for most Americans and thank goodness for it." Ungar thinks the results will be good for the rich, who will still be able to buy expensive insurance for luxurious care; and good for the poor, who will finally be able to "get their families the medical care that they need." His Hallelujah is genuine.

I completely support the medical loss ratio provision, but I believe Ungar should have mentioned that the poor are unlikely to be able to get the medical care they need unless there is a federally enforced mechanism for limiting costs. As far as I know, there is no such mechanism in the Affordable Care Act - the providers' lobbies saw to that. So federal funds will continue to subsidize providers' profits (as long as the providers aren't insurance companies), and prices will continue to rise way beyond the means of poor and middle-income families.

I also believe he is mistaken when he suggests that "the death of large parts of the private, for-profit health insurance industry" will lead to the advent of a single-payer system. As T.R. Reid points out in his excellent 2009 book, The Healing of America, "the United States is the only developed country that relies on profit-making health insurance companies to pay for essential and elective care." Those other OECD countries, however, do not all have single-payer systems. Britain, Canada, Sweden, Denmark, Norway, and Spain do. France, Germany, Japan, Belgium, the Netherlands, and Switzerland do not. Like us, they finance health care through competing private (but not-for-profit) insurers. There is no reason we could not do the same.

The United States has taken an important step forward by limiting insurers' profits. We now need to do something about profiteering in other parts of the gargantuan health-care industry. If we truly want to improve our health-care outcomes, provide health care for all Americans, and still spend less money per capita on health care, we need to take lessons from other developed nations, all of whom are ahead of us in all categories (see, for example, this 2010 article on a Commonwealth Fund study, or check out the facts and figures yourself at the World Health Organization's detailed database search page).

Or we can continue down our present path of allowing lobbyists to finance elections and line the pockets of our elected representatives in hopes of reversing or indefinitely deferring any meaningful health-care reform.
Posted by LaVonne Neff at 11:48 AM