The United States of Florida; or, Why we can't give up Social Security and Medicare 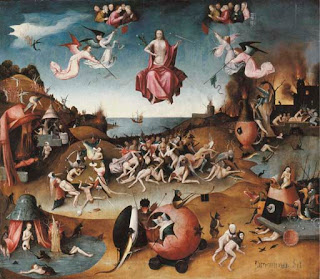 Yes, we have to do something about the federal budget. Yes, Social Security and Medicare cost a lot (about 1/3 of total expenses and rising, according to this graph). It's not surprising that politicians want to reform them, or redesign them, or cut them, or even get rid of them. But what exactly would we do without them?

Folks, we can't just say we can't afford them.

If that doesn't scare you, look at it this way: in only 10 or 12 years, the entire U.S. will have a higher percentage of seniors than Florida has right now (only 17% of the Sunshine State's residents are 65 or older).

Social Security and Medicare are expensive. Reforming them is a great idea - but not if those reforms mean trading defined benefits for private financing. Privatizing Social Security and Medicare, as our experience with 401(k)s has shown, could mean big rewards for the financial industry. Unfortunately, it could also mean that a high percentage of unemployable seniors would have literally no place to go.
Posted by LaVonne Neff at 8:07 PM

Very well said. The other end of this issue is that the longer Boomers stay in the work force, the fewer good jobs are available for 20 and 30 year olds. We are counting on them to put money into the Soc Sec system, but if they are working low paying service jobs, their contributions to soc. sec. will be minimal. The solution seems to be "fund your own retirement and pray for good health"!

Why is Social Security going broke? When the pot was overflowing, they took money from it to use it for other purposes such as welfare. We the working class paid into that fund along with our employers. No one but retirees or people who paid into that fund and were disabled, or
widows and children of those who died should have collected one cent
from social security.