Fixing health care - or, when the demon you DON'T know is better than the one you do 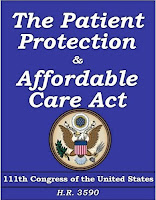 Last week a federal judge from Virginia ruled that part of The Patient Protection and Affordable Care Act is unconstitutional, and now the legal battle is moving to Florida. Also last week a Bloomberg poll found that 55% of Americans would like to repeal the health-care law, while only 40% want to keep it as is (5% aren't sure).

Now, I'm not sure what all of those 55% were thinking. I can imagine wanting to repeal the Affordable Care Act if I were fully persuaded that a better health-care law would immediately replace it - one that was funded either by a single payer or by not-for-profit private insurance; one that would put price controls on pharmaceuticals, medical equipment, hospitals, medical salaries, and other out-of-control expenses; one that would dramatically lower the cost of medical education so that we'd have more doctors, and so that more of them could afford to go into primary care; one that would assign a lot of primary care to pharmacists, midwives, physician assistants ...

Yes, I like socialized medicine. Not every aspect of it, and not necessarily the way it is practiced in every country that has it (though I'd be quite happy with France or Switzerland pretty much across the board). But even so, I don't think I would have answered yes to repealing the health-care law, because I don't think America has yet figured out how to do health care better.

Alas, most Americans are completely unaware that health care as practiced in other developed countries costs considerably less than our patchwork system, and that the results are nearly always equivalent or better. In fact, an October 2010 study by the Commonwealth Fund shows that "even as health care spending per capita has increased in the U.S. over the last three decades, the nation has fallen behind 12 other wealthy nations in 15-year survival for men and women at ages 45 and 65." Furthermore, the study points out, these rates can't be explained by smoking (we smoke less) or obesity (we're obese, but our obesity rate has increased less).

Steven Miles, MD, Professor of Medicine and Bioethics at the University of Minnesota Medical School in Minneapolis, has put together a fascinating Power Point presentation comparing health care in 15 developed nations. To see it, go to his faculty web page, scroll down (reading his impressive credentials as you go), and click on "US and Developed Countries:  Comparing Health Care Systems - 2009." In 48 slides he not only compares systems, he also dispels myths and offers alternatives. Here are a few of his findings:
In spite of all this depressing (for Americans) data, Dr. Miles is an optimist: he thinks the U.S. will eventually wake up and improve health care for political and economic reasons. "The US cost of health care is so high that it is hampering our ability to sell products overseas," he told me. "Consider that about 10% of a $40,000 car made in Sweden is the built-in cost of its health-care system. For a similar US car, the health-care component is $6,800. Who will pay $2800 for an invisible car accessory?"

Probably someone who thinks that socialized medicine is diabolical, and that American health care is the best in the world.
Posted by LaVonne Neff at 11:14 AM