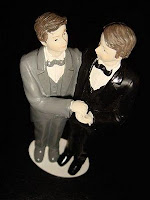 Gay marriage is now legal in the nation's capital, and today Washington's first same-sex weddings took place. When it became obvious that this was going to happen, the welfare agency of Washington's Catholic Archdiocese took action. "Employees at Catholic Charities were told Monday that the social services organization is changing its health coverage to avoid offering benefits to same-sex partners of its workers," wrote William Wan in the Washington Post last week.

Since then a number of social conservatives have publicly sympathized with Catholic Charities, lamenting the D.C. Council's actions as a blow to religious liberty and suggesting, as one pundit said, that "Catholic Charities had to choose between church teaching and ministering to the city’s neediest residents."

Catholic Charities USA is a national network of agencies that serves over 8.5 million people a year. Their website describes their beliefs: "We are one human family whatever our national, racial, ethnic, economic, and ideological differences. We are our brothers’ and sisters’ keepers, wherever they may be." The Washington DC branch of Catholic Charities--the one that is changing its health-care benefits--offers services to the homeless, children at risk, people living with developmental disabilities and mental illness, immigrants and refugees, and people in crisis. According to the DC branch's employment opportunities document, their employees are hired "without regard to race, color, religion, creed, gender, national origin, age, disability, marital or veteran status, or any other legally protected status."

Let me see if I understand. The Washington DC branch of Catholic Charities is fine with both hiring and serving people who do not live according to Catholic teachings. For example, a gay person can work for Catholic Charities, and the organization is happy to provide support for gay persons in need. But it draws the line at providing health benefits for spouses of its own gay employees--though it provides health benefits for spouses of straight employees who are, say, Muslim or atheist. Is this just? In what way is church teaching compromised by providing health care for people who go against church teachings? Isn't that exactly what Catholic Charities does for the poor?

"Everyone should be able to draw from work the means of providing for his life and that of his family, and of serving the human community."
--The Catechism of the Catholic Church, 2428

This might be a religious liberty issue if Catholic Charities believed all its employees should be practicing Catholics in good standing and the city council was telling them they had to hire Hindus and homosexuals. However, Catholic Charities is apparently perfectly willing to hire non-Catholics and gays. How then is their religious liberty infringed by requiring them to give equal benefits to everyone?

No doubt the argument is this: In Catholic theology, gay marriage is not only immoral, it's impossible. Thus their gay employees are actually single, not married, so their benefits should be those of other single employees. Here's the problem with that argument. In Catholic theology, remarriage of a divorced person is also immoral and impossible (unless the divorced person obtains an annulment). Still, I'm willing to bet that there are divorced-and-remarried people among Catholic Charities of Washington DC's 800 employees, and I'm also willing to bet that their spouses are on their health plans.

Ah, but in the case of heterosexual marriage, the church makes a distinction between legal marriage and sacramental marriage, and Catholic Charities probably bases benefits decisions on employees' legal status. Exactly. If they can do it for non-sacramentally married heterosexual couples, they can also do it for non-sacramentally married homosexual couples. In neither case is Catholic Charities being forced to hire these people or to say that their marriages are sacramentally valid, so no abridgement of religious freedom is involved.

What's involved is justice, not religious liberty. Catholic Charities knows a lot about justice. It's time they practiced it with their employees.
Posted by LaVonne Neff at 1:52 PM