Married for money: the unnatural union of government and business 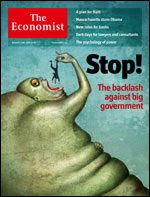 This week's Economist, a conservative journal from the U.K., looks at "the backlash against big government." Using Scott Brown's win in Massachusetts as their starting point, the lead article ("Stop!") admits that "this newspaper's prejudice is to look for ways to make the state smaller." Their suggestions for the U.K. and the U.S. governments: slim your workforce, cut public-sector pay and pensions, cut back entitlements, and get rid of agricultural departments.
I agree with The Economist's analysis on many points, and I appreciate the article's fairness in acknowledging the major role George W. Bush played in increasing government spending and regulation. I wonder, though, if the popular backlash is against more than just big government. Last week I wrote in a Facebook update:


I understand why many people are afraid of Big Government. What I don't understand is why some of the same people seem unafraid of Big Business, which--if unrestrained--has even greater potential of doing harm.

After reading a long string of comments by my Facebook friends, I'd make just one change to my update: instead of "has even greater potential," I'd write "has equal potential." As Carla Barnhill wrote on my Facebook wall:


Since the two are about to become one, the differences won't matter much.

Government and business aren't supposed to be buddies, and they certainly aren't supposed to get married and set up a comfortable home for executives and lawmakers. And yet that is what has been happening in America and the U.K. for several decades. I suspect that many people who complain about big government--conservatives as well as liberals--are actually upset less about government than about the enormous power structure created when government and business effectively become one.

Made even easier by the Supreme Court's recent largess, influence peddling has been visible throughout the health-care debates. The President let pharmaceutical and insurance companies limit his proposals, and the Senate, by getting rid of the public option, offered insurers a huge gift. In the end, many liberals who initially favored health reform rejected the cozy government-and-business-together plan (see this interesting  interpretation of the Massachusetts election results). Liberal blogger Marcy Wheeler wrote last month, after the Senate eliminated just about every feature of the original bill that would have limited insurers' profits:


It’s one thing to require a citizen to pay taxes–to pay into the commons. It’s another thing to require taxpayers to pay a private corporation, and to have up to 25% of that go to paying for luxuries like private jets and gyms for the company CEOs.

It’s the same kind of deal peasants made under feudalism: some proportion of their labor in exchange for protection (in this case, from bankruptcy from health problems, though the bill doesn’t actually require the private corporations to deliver that much protection). In this case, the federal government becomes an appendage to do collections for the corporations.

Bad, bad, bad--not because government is bad per se (it is morally neutral), but because in allying with business (which is also morally neutral) it risks abdicating its role as protector of life, liberty, and the pursuit of happiness. The solution, though, is not for government to disappear, but for it to return to its original purpose of preserving the common good. The Economist article submits that smaller is not always better: "As the horrors in Haiti demonstrate, countries need a state of a certain size to work at all; and more government can be good." Without government--local, state, and national--we would be unlikely to have adequate national defense, highways, education, justice, or care for those too old, ill, or poor to care for themselves, to name only a few areas where we function better as a community than as individuals.

It is hard to see how the common good is ever served, however, by marriages between government and business, brokered by lobbyists, for the mutual enrichment of a select group of the already-rich.
Posted by LaVonne Neff at 6:56 PM