Catholics, Protestants, the via media, and roadkill 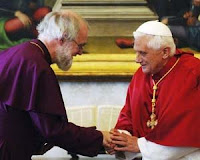 If you have any interest in the Episcopal Church, you've already been exposed to far too many summaries, comments, analyses, predictions, outbursts, and uncharitable remarks about what Bishop N.T. Wright has called "the slow-moving train crash of international Anglicanism." I am not going to offer an opinion here about what has been done or should be done. Instead, I'd like to point out something very interesting about Archbishop Rowan Williams's official response to the Episcopal General Convention 2009: one of his major concerns is not just holding the Anglican Communion together, but also preserving unity with "the Church Catholic."

In 2006, some three years after Rome suspended ecumenical talks with Canterbury because of Gene Robinson's consecration, Williams met with Benedict XVI. This is part of what the pope said to the archbishop:

Recent developments, especially concerning the ordained ministry and certain moral teachings, have affected not only internal relations within the Anglican Communion but also relations between the Anglican Communion and the Catholic Church. We believe that these matters, which are presently under discussion within the Anglican Communion, are of vital importance to the preaching of the Gospel in its integrity, and that your current discussions will shape the future of our relations. It is to be hoped that the work of the theological dialogue, which had registered no small degree of agreement on these and other important theological matters, will continue to be taken seriously in your discernment. In these deliberations we accompany you with heartfelt prayer. It is our fervent hope that the Anglican Communion will remain grounded in the Gospels and the Apostolic Tradition which form our common patrimony and are the basis of our common aspiration to work for full visible unity.

Williams appears to share Benedict's wish for "full visible unity." Though several years ago he wrote that "an active sexual relationship between two people of the same sex might ... reflect the love of God in a way comparable to marriage," his response to General Convention has quite a different tone. It is not the time, he says, for the Church to bless same-sex unions and thereby change the way it has "consistently read the Bible for the last two thousand years." It is not the time for admitting people living in such unions to the ordained ministry. Not enough "painstaking biblical exegesis" has been done. The necessary consensus for so far-reaching a change does not yet exist.

I expected Archbishop Williams to do whatever he could to keep Anglicans under the Canterbury roof. I was surprised, however, at his strong concern for "the Church Catholic," by which he appears to mean not only the Anglican Communion but also the Roman Catholic Church and probably other Anglican ecumenical partners as well. Eight of his 26 paragraphs appeal to ecumenicity:

7. ... it is clear that a positive answer to this question would have to be based on the most painstaking biblical exegesis and on a wide acceptance of the results within the Communion, with due account taken of the teachings of ecumenical partners also....

8. ... a blessing for a same-sex union cannot have the authority of the Church Catholic, or even of the Communion as a whole....

9. ... So long as the Church Catholic, or even the Communion as a whole does not bless same-sex unions, a person living in such a union cannot without serious incongruity have a representative function in a Church whose public teaching is at odds with their lifestyle. (There is also an unavoidable difficulty over whether someone belonging to a local church in which practice has been changed in respect of same-sex unions is able to represent the Communion's voice and perspective in, for example, international ecumenical encounters.)

15. ... This again has an ecumenical dimension when a global Christian body is involved in partnerships and discussions with other churches who will quite reasonably want to know who now speaks for the body they are relating to when a controversial local change occurs. The results of our ecumenical discussions are themselves important elements in shaping the theological vision within which we seek to resolve our own difficulties.

18. To accept without challenge the priority of local and pastoral factors in the case either of sexuality or of sacramental practice would be to abandon the possibility of a global consensus among the Anglican churches such as would continue to make sense of the shape and content of most of our ecumenical activity...

19. ... some see this as best expressed in a more federalist and pluralist way. ... But it is not the approach that has generally shaped the self-understanding of our Communion – less than ever in the last half-century, with new organs and instruments for the Communion's communication and governance and new enterprises in ecumenical co-operation.

22. ... there is at least the possibility of a twofold ecclesial reality in view in the middle distance: that is, a 'covenanted' Anglican global body, fully sharing certain aspects of a vision of how the Church should be and behave, able to take part as a body in ecumenical and interfaith dialogue; and, related to this body, but in less formal ways with fewer formal expectations, there may be associated local churches in various kinds of mutual partnership and solidarity with one another and with 'covenanted' provinces.

23. ... perhaps we are faced with the possibility rather of a 'two-track' model, two ways of witnessing to the Anglican heritage, one of which had decided that local autonomy had to be the prevailing value and so had in good faith declined a covenantal structure. If those who elect this model do not take official roles in the ecumenical interchanges and processes in which the 'covenanted' body participates, this is simply because within these processes there has to be clarity about who has the authority to speak for whom.

Anglicans pride themselves on being neither Catholic nor Protestant, but rather a via media incorporating elements from both traditions. The Episcopal Church in the U.S., by insisting on its own view of truth and justice without general worldwide concurrence and in the face of much opposition, is acting in a very Protestant way. The Archbishop of Canterbury, by appealing to tradition, authority, and consensus, is sounding quite Catholic. And yet, in his genial Anglican way, he doesn't want to banish the Protestant dissenters--"there is no threat of being cast into outer darkness," he writes.

But can the via media persist as a viable ecclesiological model? Or has it already become the median strip where roadkill piles up as traffic rushes past in opposite directions?
Posted by LaVonne Neff at 12:37 PM

Ah, Mrs. Neff, you are very insightful in your analysis of Rowan of the Magnificent Eyebrows. But I am pained by the way you use "Protestant" to mean independent, individualist, self-serving and unconcerned with the larger community of Christians. But you know what I think the word means. Your readers on the other hand are welcome to read my essay on the meaning of "Protestant" at http://tinyurl.com/l2lz6h.
--Mr. Neff (a voice crying in the wilderness)

But Mr Neff, I didn't say that. My use of "Protestant" could just as easily be interpreted to mean courageous, forward thinking, and willing to do the right thing even if the rest of the world is not. Like Jesus.