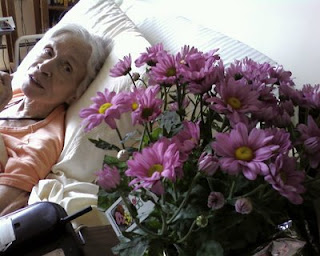 My friend Lucille died last Thursday. She had just turned 83, and she had been fighting cancer for several years. Her friends and family gave her a big birthday bash when she turned 80, thinking she wouldn't live out the year. She fooled us.

Lucille's faith was pietistic and evangelical, bordering on fundamentalist. A devout Anglophile, she fell in love with the high-church services at St. Barnabas Episcopal Church and became an Episcopalian five years ago, just before the controversy over Bishop Robinson shattered the Anglican peace. For many months she wavered. She felt she couldn't stay in a denomination whose theology she abhorred, but neither could she leave the liturgy she loved or her friends and the pastoral staff, all of whom she knew to be deeply Christian. Eventually she joined an evangelical Anglican parish, the Church of the Resurrection, where she made new friends without losing the old.

Meanwhile Lucille's husband died, she moved into a new apartment building (where she made still more friends), and she had surgery to remove a lobe of her lung, which contained some malignant tumors. The doctors thought all the cancer was gone. Then, at a routine check-up, some spots were discovered on her liver. Lucille and I began making regular visits to an oncologist's office and a chemotherapy clinic (where, of course, she continued to make friends).

The names chosen by Lucille's two churches reflect her personality and deep faith. Like St. Barbabas, she was an encourager. That, along with her oft-expressed gratitude, is why she had so many friends. And she wholeheartedly believed in the Resurrection of Jesus Christ. She knew that to die was to be with him. She had no fear of death itself, but she hoped she would not have to die alone.

Click here to read a moving account of Lucille's last hours by her friend Barbara Gauthier, a prayer minister at the Church of the Resurrection, who held her hand as she passed peacefully to her rest.
.
Posted by LaVonne Neff at 1:56 PM